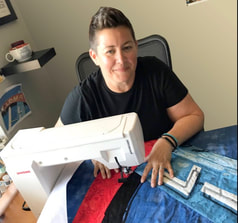 California artist Lisa Kijak finds inspiration in the distressed surfaces of items left to weather the elements of sun, wind and rain. In her Neon series, Kijak explores the details of vintage neon signs that are broken and worn down and elevates them, calling attention to them and giving them new life. She uses layers of fabric and thread to mimic the peeling paint, faded patinas and scratched surfaces of these signs, sewing together thousands of pieces of fabric to develop two dimensional works that feel painterly in their approach.
​
Kijak earned a Bachelor of Fine Arts degree in graphic design and printmaking from Mason Gross School of the Arts at Rutgers University, as well as a Masters in Art Therapy from Loyola Marymount University. Her work has been shown in juried and invitational exhibitions throughout the United States and Europe.